Greece, the land of Myths: looking back at the 6 June Greek Presidency event on Copyright

On 6 June, the Greek Presidency of the EU organised an International Conference under the heading ‘Copyright and the Digital Agenda for Europe: Current Regulations and Challenges for the Future’, in lovely Athens.

So, lovely Athens first: the event was preceded on 5 June by a very nice and civil cocktail held at the Electra Palace Hotel, which led us to enjoy the beautiful view pictured below. 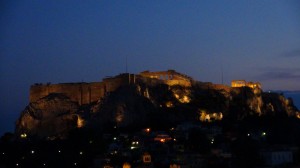 The next day, things became a little less nice and civil at the actual conference, held at the Megaron. This was not entirely unexpected, if one considers the Program (sadly not entirely up-to-date) which does give a certain weight to the right holder side of the story, a weight that clearly translated itself in terms of representativity in the audience. In terms of non-right holders, it was up to C4C and BEUC, the European Consumer Organisation, to paint the bigger picture revolving around copyright (little things like fundamental freedoms, innovation, etc.), and to EBLIDA, the European Bureau of Library Information and Documentation Associations, to highlight the issues faced by libraries and archives (notably in the area of e-books). Representing the Internet world (or was it a tree?), it was up to Google to represent…well, I guess Google.

C4C mainly reacted in its intervention on some of the statements made by previous panelists, to highlight that:

Aside from the fact that I have never been faced with an audience that behaved in such an overtly hostile manner in reaction to the intervention of a representative of BEUC (you know, the association that represents consumers, aka the people that buy books, music, go to movies, etc), the key take-away C4C brought back from this event is the fact that quite a few myths are still up in the air at such events. For clarity’s sake, this is what mythology and myths are about:

“Mythology is the study of whatever religious or heroic legends are so foreign to a student’s experience that he cannot believe them to be true. . . . Myth has two main functions.  The first is to answer the sort of awkward questions that children ask, such as:  ‘Who made the world?  How will it end?  Who was the first man?  Where do souls go after death?’. . . The second function of myth is to justify an existing social system and account for traditional rites and customs.”

I guess the awkward question in this context is ‘Why does copyright deserve such a special treatment that affects fundamental rights of citizens and is oblivious of reality?’. And as regards the second function, a major portion of the event we attended certainly seemed to be directed at justifying the existing copyright rules and claiming that no changes were needed to the current system.

But then again, isn’t Greece the place where many myths thrived? But we’re back in Brussels now, so C4C has decided to start comparing some of the ongoing myths with reality.

Our first Myth Vs. Reality Fact Sheet relates to the so-called data produced by the Office for the Harmonization of the Internal market (OHIM) and the European Patent Office (EPO) in their Study on intellectual property rights intensive industries’ contribution to the economic performance and Employment in the European Union, as that data was flaunted around during the entire event. It’s a one-pager, and we encourage you to read and circulate, so that these data stop being quoted as credible by EU institutions.