On Wednesday 2 July, C4C attended the opening of the ‘Information Influx‘ Conference at the Oude Lutherse Kerk of the University of Amsterdam. 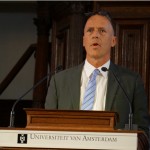 Usually, such events are pretty unsurprising, especially when the agenda reads: first, high placed people from the University saying nice things about the great people at IViR as they celebrate the Institute’s 25th birthday; second, Yochai Benkler, Professor at the Harvard Law University, reminds us why his mind is a thousand times superior to ours (well, at least to mine) and why his vision of what may come is much clearer than that of all policy-makers I encounter in Brussels on any given day; and finally, Vice-President Neelie Kroes of the European Commission makes the usual speech about the wonders of the digital agenda. 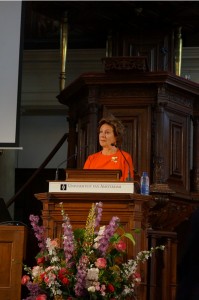 The title of Kroes’ intervention as announced a couple of days before already gave away the promise of something that might be bolder than usual, namely ‘Our Single Market is Crying out for Copyright Reform!’. After all, if there’s one thing you learn when gravitating the EUbubble long enough, it is that end-of-term Commissioner tend to be more outspoken.

And that, she certainly was. To that, one must add the setting of the Old Lutherian Church at the University of Amsterdam, which combined with VP Kroes’ speech conferred an additional aura of funeral eulogy for copyright to her message.

Starting with a refusal to sing ‘Happy Birthday’ for fear of copyright claims, Ms Kroes admitted being ‘fed up’ with copyright, the topic being so complex and unreasonable, that it is simply impossible to explain to one’s  neighbour.

Source of frustration, EU Copyright desperately needs to be reviewed according to the Commissioner, so that it fits with users’ common practices today and ceases to be anachronistic. Access to content, including cross-border, is a must in the single market. Her speech was not yet published when putting this post online but it should hopefully appear here soon. – Update 3 July, 12:21: the speech is available here. Ms Kroes’ way of presenting it on her Facebook page as set out below gives a good summary of her views.

Oh, and as regards the wisdom shared by Professor Benkler, I encourage you to read the slide embedded below, close your eyes, and think about the meaning of every word in it, both in isolation and combined amongst each other…and once you’re done, just imagine there were 20 more of these during his intervention.   So much food for thought that it would, as stated by the host of the event, Professor Bernt Hugenholtz, be appropriate for discussion at several conferences in the future.