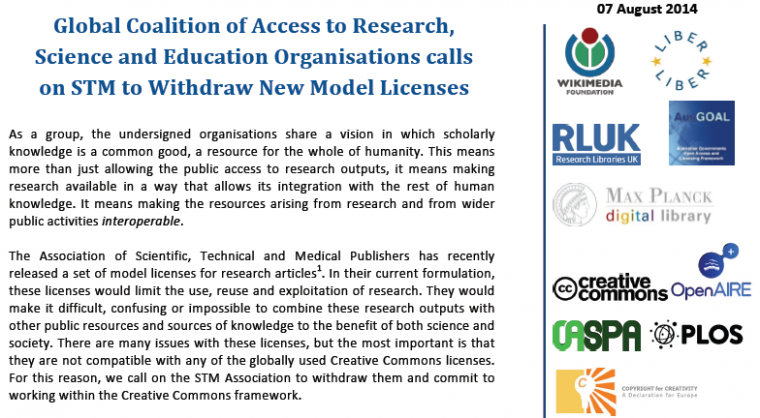 The letter points out that these model licences are not compatible with any of the  globally used Creative Commons licenses, which would:

C4C is also concerned that STM’s model licences aim to regulate text and data mining (TDM). This would not be new, if one considers Elsevier’s recent introduction of TDM click-through licenses, and would yet again demonstrate how licencing delivers unbalanced results. For reminder, Elsevier’s effort equally resulted in a public outcry, as nearly 50 signatories called on the publisher to withdraw its TDM policy (see Peter Murray Rust’s two part analysis regarding Elsevier’s licence, here and here, as well as SPARC’s very good summary).

The myth of licencing as THE solution was already seriously dented follwing the European Commission’s so-called Licences for Europe (L4E) process. This process resulted in ten pledges, one of them being a commitment by the STM publishers association to facilitate TDM through a licensing clause. This move was not welcomed by any of the stakeholders sitting on the other side of the fence (as not many of them were left sitting around the table after withdrawing over concerns about the scope, composition and transparency of the process).

C4C considers that more licences are not necessarily the solution, and certainly not in the context of TDM practices. This is independent of their ‘financial’ impact, as so-called free licences may be such in terms of money exchanges, but always carry their share of constraints. More generally, these approaches do not help research and innovation to thrive and continue to put Europe at a competitive disadvantage (for an in-depth analysis, see the Lisbon Council’s special briefing on ‘mapping text and data mining in academic and research communities in Europe’).

We believe bold action is needed at EU level. The United Kingdom took a first step in the right direction, as the Government recently enacted legislation excepting non-commercial TDM from copyright. One can only hope the European Commission follows the UK’s lead.

For a more detailed analysis of STM’s model licences we would like to point you to Dr Andrés Guadamuz (aka @Technollama) blog post.