The Copyright Reform: Everyday I’m Hurdling – The EC’s latest hurdles on the race to the finish line

The  copyright debate often feels like a hurdle race, and its seems that the current race to the  presentation of the European Commission’s (EC) copyright reform proposal has been extended along the way from the 110 meters hurdles to the 400 one. While we were expecting to see the finish line before the beloved Brussels summer break, suddenly a new set of obstacles has popped-up, as the EC launched a yet another public consultation on “the role of publishers in the copyright value chain and on the ‘panorama exception’” (deadline: 15 June, 2016). This not only means the race isn’t over yet, but that actually the finish line won’t come in sight before September.

So, what’s this new consultation all about? The questionnaire is split into 2 parts.

First, it tackles “the role of publishers in the copyright value chain”. In plain English this refers to the so-called neighbouring rights, and more specifically the notion of ‘ancillary copyright’. The latter is a concept that “institutes a copyright fee to be paid by online news aggregators (such as Google News) to publishers for linking their content within their aggregation services” [1], which has been introduced in Germany and Spain, but rejected in countries such as France and Austria.

In both countries these legislative initiatives have been contested for their negative impact, notably on innovative European companies. The Spanish legislation is even more stringent that the German one, as publishers cannot opt out of receiving this fee. The damaging effects notably stem from the fact that the Internet changed the notion of who is a publisher, as now everyone can publish content online, hence exercising their freedom of expression and increasing media pluralism. As a result of this increased creativity and the fact that everyone can be a creator, publications from bloggers and creative commons content falls into the web of ‘ancillary copyright’ when looking at the legal language adopted in Spain, for example.

NERA Economic Consulting depicted the impact of the legislative changes in Spain in the graphic below, in a report for the Spanish Association of Publishers of Periodical Publication. 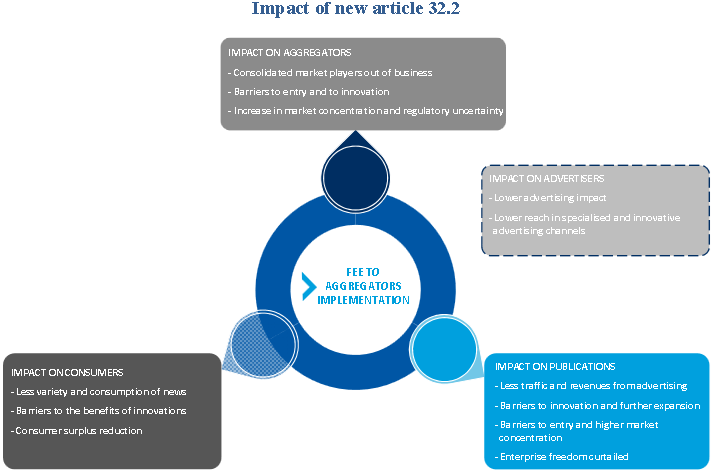 Who is calling for such a new right, which extends the remit of copyright? It has been vocally requested by several (German and Spanish) press publishers. However, not all publishers are singing from the same hymn sheet and more generally, more and more voices have been questioning the merits of this terrible idea. Amongst them, are:

Tonight 6 April, Germany’s digital association Bitkom is organising, together with the State of Hessen, a debate on ‘news publishing and digital innovation’. This is the first debate on the topic  since the launch of the consultation, so C4C is curious to hear what position our German European Commissioner for the Digital Economy and Society, Günther Oettinger, will take.

The 2nd part of the consultation tries to collect input on the ‘panorama exception’, or as the EC puts it the “use of works, such as works of architecture or sculpture, made to be located permanently in public places”.  In plain English, it’s all about the use of images of public space in a personal or commercial context. To clarify the latter, you need to see ‘commercial’ as a broad concept, when you think of the fact that Wikimedia are considered a commercial outlet. This weeks’ ruling by the Swedish Supreme Court against Wikimedia Sweden illustrates their struggle with copyright legislation and the freedom of panorama.

The issue here is that there is an un-harmonised exception in the EU copyright legislation. In practice this means that Member States have chosen to implement it or not, and if they already did so, they did it in different ways. The result is that people are likely to unknowingly break the law, especially when publishing images  online. So, don’t even think to put up a picture online of the European Parliament building in Brussels or Strasbourg, or of something more fun to share with friends, the Atomium in Brussels or the Eiffel tower at night in Paris. Wikimedia collected more absurdities here.

What should be done?

If you ask us, what the EC should be doing instead, our answer would be increasing the level of harmonisation by making relevant exceptions mandatory. It is indeed undeniable that the current differences among Member States in the implementation of exceptions creates legal uncertainty, resulting in citizens, businesses, researchers, teachers, etc. never being quite sure what is legal and what is illegal under copyright law. In our view, increased harmonization enables all users to (better) understand their rights and obligations across the EU, and we consider all EU users should have the same rights in interacting with culture and knowledge.