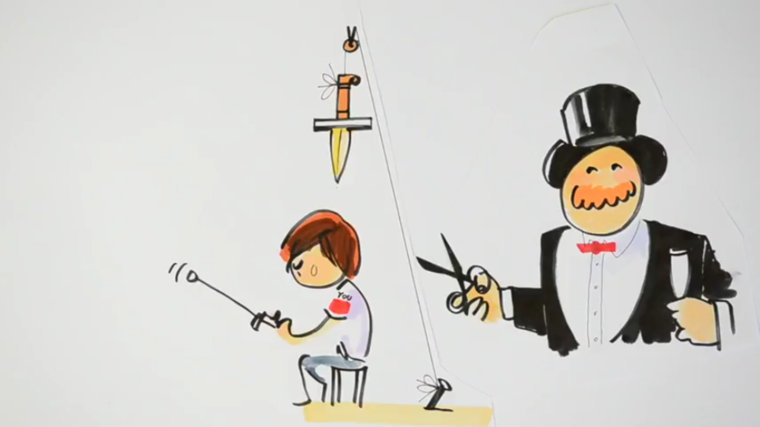 #CopyrightWeek – Copyright and Free Speech: the rise of shadow regulation or how to let private companies decide what goes and stays on the Internet

The theme of today’s #Copyrightweek is ‘Copyright and Free Speech’. The idea is to tell policy makers that freedom of speech is fundamental to democratic systems and that copyright should promote, not restrict or suppress, free speech.

Well, actually, not obvious at all, if you look at the copyright creep that has occurred through legislation and ‘moral pressure’ applying all over the Internet. The phenomenon has been identified by the Electronic Frontier Foundation (EFF) as ‘Shadow Regulation‘ and extends beyond the realm of copyright.

Iit basically pertains to the policing of the Internet by private companies, either:

These types of more or less coerced interventions can be found in multiple areas these days (hate speech, terrorist content, rogue pharmacies and the recently popular ‘fake news’ tag), but certainly have been a constant feature in copyright discussions, both in the EU and in other geographies (remember SOPA/PIPA?).

In this text, Article 13 stands out as a bit of an oddity, as it actually deals with matters that most digital rights lawyers would expect to see included in other legal instruments, such as the IPR Enforcement Directive or the Ecommerce Directive. The issue at stake is indeed that of the liability of information society service providers (such as online platforms) for content uploaded by their users and that could infringe copyright, packaged under the label ‘sharing of value’.

1. Article 13 as privatised censorship of all content by an undefined number of online companies following an undefined procedure

There are so many loose and dangerous ends in the proposed Article 13, that we have tried to summarize them in the table below:

2. How Article 13 is in direct contradiction with Freedom of speech principles and other rules enshrined in EU law

So why did the European Commission decide to take this approach of ‘forced voluntary agreements’ between online platforms and rightholders? Because if they proposed an actual legal provision that mandates these same online platforms to scan content uploaded by users, they would be infringing existing European rules ( notably Articles 14 and 15 of the Directive 2000/31 on electronic commerce, also referred to as the E-commerce Directive, which prohibit general monitoring obligations to be imposed on hosting providers), the EU Charter of Fundamental Rights (notably Articles 8 and 11 which relate to freedom of expression and access to information as well as privacy) and established case law by the Court of Justice of the European Union (CJEU), as set out by EDRi.

But you don’t have to trust us on this: this is the view of many academics working on copyright legal issues, as demonstrated by: 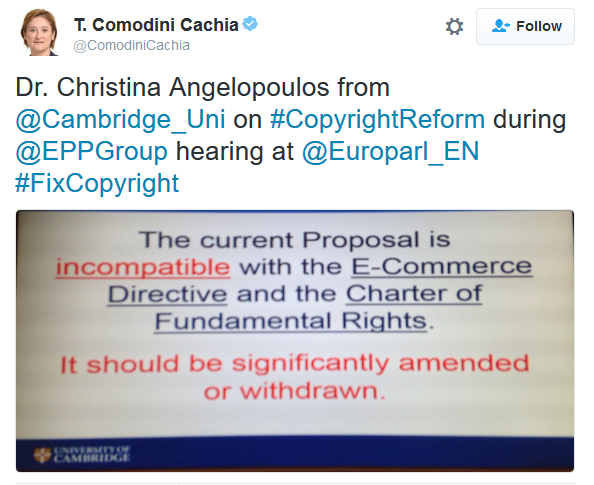 Surely, that is a clear message?

Conclusion: ‘Free speech: only as strong as the weakest link’ (EFF) 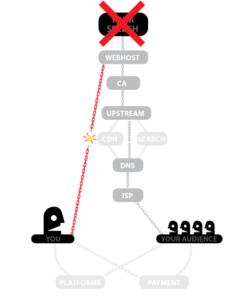 Source: EFF – Free speech only as strong as the weakest link – https://www.eff.org/free-speech-weak-link

The expression ‘Free speech is only as strong as the weakest link’ was used by the Electronic Frontier Foundation in a 2011 blog post accompanying a dynamic interface that maps out the relationships between users, intermediary services and other users on the Internet.

The reason for which they did this has never been more actual than today:

‘One of the key pressures on free speech weak links comes from back-room agreements with the companies that operate at each level—which we call Shadow Regulation. ‘

‘(…) The Internet has delivered on its promise of low-cost, distributed, and potentially anonymous speech. Reporters file reports instantly, citizens tweet their insights from the ground, bloggers publish to millions for free, and revolutions are organized on social networks. But the same systems that make all of this possible are dangerously vulnerable to chokeholds that are just as cheap, efficient, and effective, and that are growing in popularity. Understanding these weak links is the first step toward making them stronger.‘

As the European Commission proposal tries to poke holes into the the free speech chain, we encourage the Members of the European Parliament and the representatives of the governments of the Member States to make each of the links stronger, and to reject the institutionalized backroom deals Article 13 is trying to push down the throat of the Internet and its users. 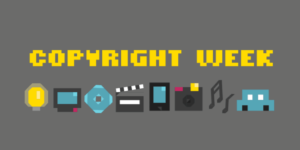 We’re taking part in Copyright Week, a series of actions and discussions supporting key principles that should guide copyright policy. Every day this week, various groups are taking on different elements of the law, and addressing what’s at stake, and what we need to do to make sure that copyright promotes creativity and innovation.