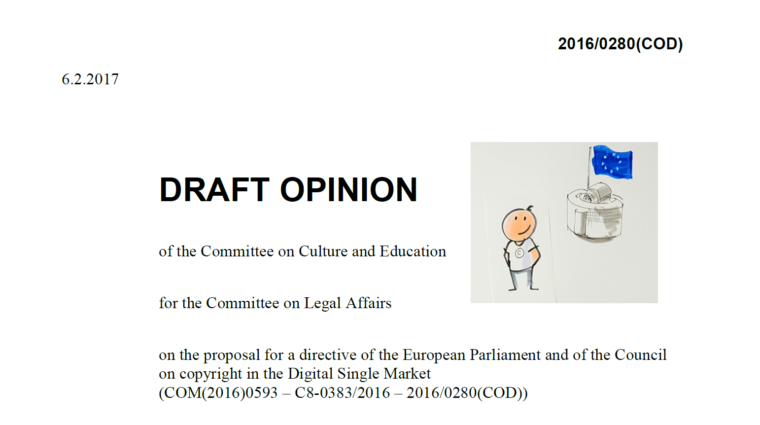 CULT Opinion on the Copyright in the Digital Single Market Directive: bad on filtering, press publishers’ rights and TDM, but putting users back in the picture!

In the process of the adoption of the Directive on Copyright in the Digital Single Market (the copyright review), several European Parliament (EP) Committees will draft Opinions that will then need to be ‘taken into account’ in the Report by the lead Committee of the EP on this matter, namely the Legal Affairs (JURI) Committee.

The draft Opinion [PDF] on the copyright review from the Culture and Education (CULT) Committee has been published last week, making CULT the first one to have a go at rethinking the un-ambitious proposal by the European Commission. The  Rapporteur of the draft Opinion is MEP Marc Joulaud (EPP, France) and FINALLY, someone has decided to talk about the users in a positive and proactive manner when looking at the copyright review. That alone, in itself, deserves to be applauded and to highlight our appreciation, we have decided to embed several of these user generated content illustration in this blog post.

However, while a few elements of the Opinion seem to indicate some willingness to introduce positive elements, they are sadly outweighed by changes that are clearly bad. So let us briefly outline the Fifty shades of grey in this first attempt at redrafting the European Commission’s initial proposal. The proposed amendments will be referred to hereunder with the acronym AM.

Sadly, the positive attempts in this Opinion are largely offset by the negative proposals in the areas of content filters, press publishers’ rights and text and data mining (in no particular order of ‘really not good’).

Where the Opinion totally fails to deliver, is on its proposed redraft of Article 13. First, C4C considers that content filtering is a matter of legal enforcement that is totally out of place in the framework of this copyright review, especially as the initial proposal by the European Commission goes in a direct collision course with the Ecommerce Directive and established case law by the Court of Justice of the European Union (CJEU).

But aside from that principle-based approach, the redraft proposed by MEP Joulaud considerably worsens the original text (who would have thought that was possible?) at various levels:

The draft Opinion also tries to clarify the redress mechanism (AM30, 73 & 74) by notably requiring rightholders to process complaints in a reasonable time.

Here again, let us start from the premise that the proposal to include a neighbouring right for press publishers should be purely and simply deleted and that the Member States that have adopted such a right should be asked to remove it.

Looking at the proposed draft Opinion from that perspective, whilst one can consider that decreasing the duration of the protection from 20 years  to 3 years (AM69) is a good step, it is still a step in a direction that should not even be considered. The same is true when looking at the effort to limit the scope to ‘professional’ publications (AM24) and to activities for commercial purposes (AM68).

Some of the proposed amendments even seem to make the whole debate even muddier, the references to hyperlinking now stating that ‘This protection does not extend to acts of hyperlinking, or to the text fixating the hyperlink, where such acts do not constitute communication to the public under Directive 2001/29/EC’ (AM24)  and ‘Where content is automatically generated by an act of hyperlinking related to a press publication, such content should be covered by the protection granted to press publications under this Directive’ (AM25). The latter is specifically puzzling: is it intended to refer to the type of automatic embeds generated on social media platforms where, if a user adds a link to an article in his status update, that links automatically transforms into a news snippet?

Whilst the Rapporteur did spot that ‘science’ is a term that means everything and nothing and hence tried to accommodate both the soft and hard sciences disciples (‘The term ‘scientific research’ used in this Directive is to be understood as referring both to the natural sciences and the human sciences’ – AM1) and tried to somehow close the loophole in Article 3 (3) (AM45), his take on the text and data mining (TDM) exception seems to be one that tries to replicate the ‘French’ approach to it, which is currently the most restrictive in place in the EU. This includes:

On the ‘lighter’ / positive side of the spectrum: Opinion should be improved on users and creators (more) in the spotlight & (timid) freedom of panorama

Freedom of panorama (AM11 & 55): limiting to non-commercial is more restrictive than the Infosoc Directive

MEP Joulaud displays a courage which was absent in the European Commission proposal, by acknowledging the ‘popular’ request from European citizens to get rid of the absurdity of an absence of an harmonized Freedom of panorama exception in the EU. However, his proposal (AM11 & 55)  fails to truly deliver a satisfying solution, as it limits the proposed exception to non-commercial uses, hence making this flavour of freedom of panorama more restrictive than the current text of the Infosoc Directive 2001/29 authorizes (see Article 5 (3) sub h).

Whilst some people may think that this ‘non-commercial’ uses limitation is not a big issue, it is worth pointing out that the CJEU has in several cases shown a willingness to interpret the notion of ‘profit making’ quite broadly, considering that the fact that a website displays advertisements can be enough to consider that there is a commercial dimension at play (and honestly, is there still much left on the Internet that does not display advertising?).

The draft Opinion also looks at the (contractual) situation of creators and tries to make the provision proposed by the European Commission slightly more effective by notably permitting claims by creators against rightholders to be brought before a court or other competent authority through an organisation acting on the creator’s behalf (AM34 & 35).

One can wonder however if the addition of ‘demonstrated’ in AM34 does not set a higher threshold for creators to bring such claims forward.

A general approach to avoiding contractual bypasses of exceptions & limitations: but what about technical protection measures bypasses?

Where MEP Joulaud did fully grasp the current loophole of the Infosoc Directive regime, is in his consistency at specifying that the exceptions he proposes or adds on cannot be bypassed by contractual provisions, as he makes such provisions ‘unenforceable’.

In the darker shades of grey: better organized licensing (but still licensing) for education (Article 4) and a mandatory Reprobel regime for Member States (Article 12)

Whilst AM8 & 9 acknowledge that it is not easy for an educational establishment to be aware of the existence of licences and to find them, and hence obliges Member States to ‘use or develop appropriate tools, such as a single portal or database’, it still remains stuck in the tunnel vision of licences will solve all, a premise that is not necessarily shared by all parties involved nor confirmed by practice.

MEP Joulaud also seems to consider across his draft Opinion that any exception to copyright automatically triggers harm for the rightsholder, hence requiring that compensation mechanisms be established (AM52 in the case of education).

The originally proposed Article 12 seems aimed at contradicting the judgement of the CJEU in the Reprobel case (C-572/13). The CJEU confirmed that the rationale of the fair compensation requirement is intended to compensate for the harm suffered by right holders, and concluded that publishers are not subject to any harm by, in this case, the reprography and private copying exception. Article 12 aims to reverse this decision by giving a right to all publishers, ‘including those of press publications, books or scientific publications’ to claim a share of the compensation for uses under exceptions.

MEP Joulaud’s proposal goes further (AM 57 & 70) by making it mandatory for Member States to ‘provide that where an author has transferred or licensed a right to a publisher, such a transfer or a licence constitutes a sufficient legal basis for the publisher to claim a share of the compensation for the use of the work’.